Everybody Has A Son In California: Adjusting To Life When Adult Kids Move To The Other Side Of The Country 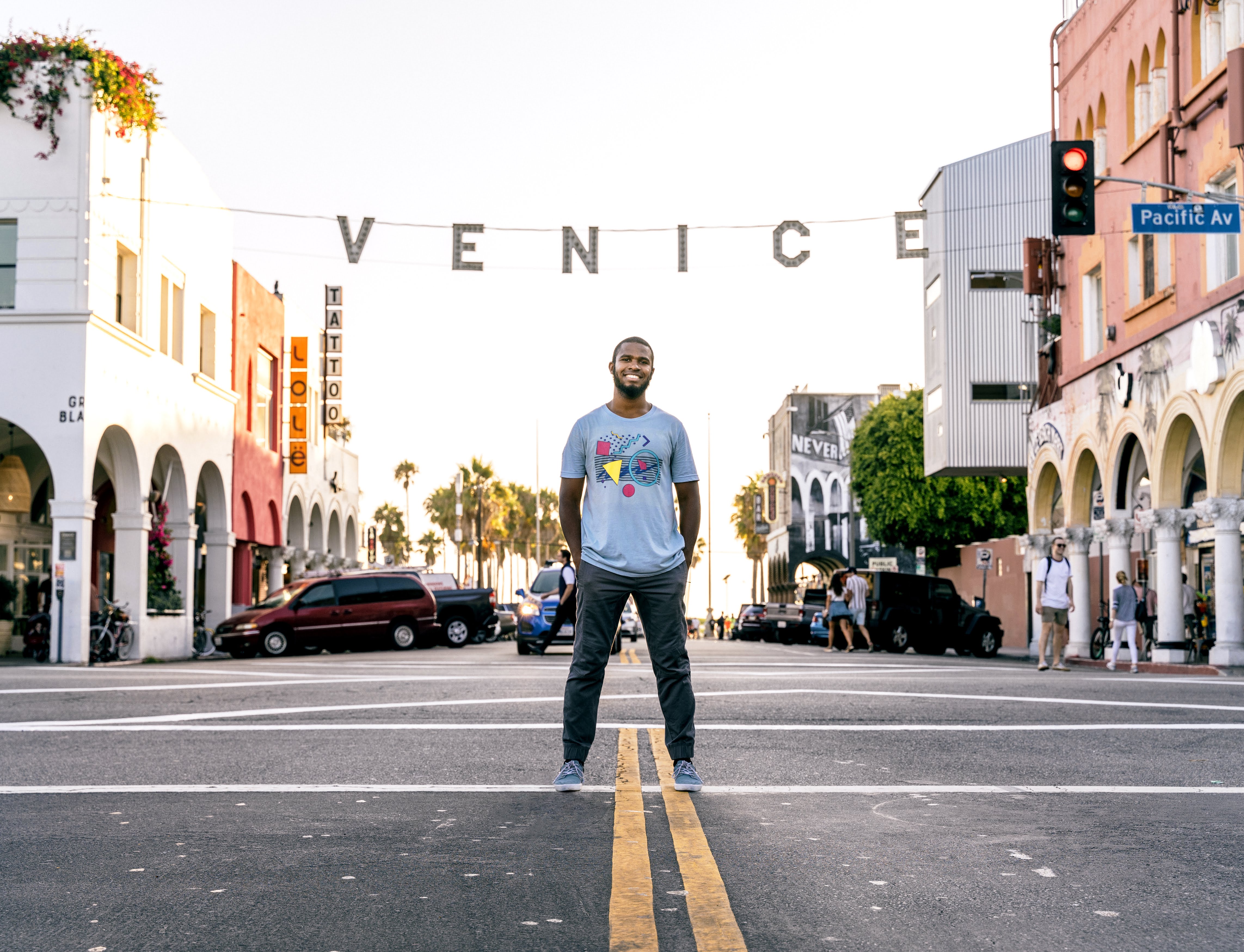 Three-thousand miles from Connecticut.  In a galaxy far, far, far away.  Okay, that’s a stretch.  Maybe it’s not a galaxy, but it’s a place that has plenty of stars, bright lights, kinetic energy, sand and water.  And, a new transplant who moved  to La La Land in 2018 with loads of courage and faith to test the waters in the media world as a commercial editor.

“This is my son, Troy. I vividly remember the morning my husband and I drove him to the airport.”

Troy is precise, steadfast and super organized with neatly written lists and Post It notes.  He is a stickler for time. He always has been since he was a kid and got his first watch.   If he wasn’t mine,  I’d think he excelled in military boot camp.  He is never late, unlike his mom who plays beat the clock like it’s an Olympic sport.   I guess I get some sort of sick and twisted rush.  LOL! But not today!

We live in Bridgeport, Connecticut, only seventy minutes from Bradley Airport in Windsor Locks, near Hartford, Connecticut. His departure time to Los Angeles was 12:30 pm.  We left our house at 8:30 am, just in case traffic was nuts.  No chances were taken. The radio volume was low. I can’t tell you for the life of me who was singing.  It didn’t matter.   Troy was quiet in the car.  I was, too.  My husband knew I was trying to hold it together. It was hard. I stared out the window with misty eyes and a potato-sized lump in my throat as I rewound thirty years of his life.  My heart was beating outside my chest. I was transfixed in another space while feeling pride and excitement for my son. Did I mention that my oldest son, Kevin and his wife, Nicole were moving to Dallas several weeks later?  Yep. It was a major time of transition.   A plateful of emotions, to be sure!

“My nostalgia meter is notoriously off the charts.”

I took loads of pictures several weeks before Troy left, documenting this big move; including him packing, eating, drinking, taking items to the Goodwill and when his car was being loaded on a big rig trailer for transport in the parking lot at the mall around the corner.  I felt like I was a paparazzo.  Troy obliged without giving me weird looks and sounds of disgust.   There’s a street named Los Angeles in Stratford, near Bridgeport.  I even took a cheesy picture of him pointing to the sign.  And, I got one of him at his elementary school, Multicultural Magnet.  I  wanted to capture and savor this important moment, if not so much for him, but for me.  This wasn’t Troy’s first time leaving home.  He went away to college in Akron, Ohio.  And for three years he had his own apartment, five minutes from me.  And, no. I didn’t wear out my welcome. It was indeed, special to see him mature, grow and figure things out.  But this time was different.  I knew it.  And, he did, too.

“What made this move significant was that he was moving so far away.”

At the airport, we hugged each other tightly and I planted a big kiss on his cheek.  I told him I loved him and to call me when he got to Chicago, the first leg of the trip. I watched his 6’2” frame walk through the revolving doors.   I prayed for his safety, so hard that I got a migraine and went to bed when we got home.  My husband suggested we go to the movies as a distraction.  I was overjoyed when I saw Troy’s text, “Mom, I just landed at LAX.”  He even sent a few pics of the iconic airport sign from the backseat of his Uber.  I was happy that my cousins Lanita and Van lived in LA and became his West Coast family. They have been so supportive and kind.

“As you have probably guessed, our relationship is extremely close; tighter than a lid on a jar of pickles.”

For that, I am extremely grateful.  We have the same loud, guttural laugh and crack up about the same things. But I can also tell by the sound of his voice if something is off-center.  Maybe, it’s MomSense.  He introduced me to Must See TV: Breaking Bad, Sunny In Philadelphia, The Office, Lost, Seinfeld (reruns) Curb Your Enthusiasm and Ozark.  I love to share my love of jazz with him, exposing him to all the greats like Miles Davis and John Coltrane; like my dad did with me.   And, he picked up on my love of The Temptations, Michael Jackson, The Jackson Five and James Brown.  Troy never makes me feel like he’d rather be someplace else when we talk on the phone; he listens intensely.  He gives pause for thoughts to sink in. He is thoughtful like that.  And, if he says he will call me or video chat at a specific time.  You better believe it will be on the dot. We both love the water and taking long walks.  And, of course he loves to tease me, especially about all the ridiculous amounts of pillows and candles in my home.

“I wish I had his bravery when I was his age.  To venture out, expand his horizons, see the world and take chances.  To fly.”

I believe as parents we provide our adult children a disservice when we hold them hostage.  They owe us nothing.  We shouldn’t chokehold them with an umbilical cord.  Part of healthy parenting includes developing self-sufficient, confident, free-thinking and responsible individuals.  How dare some parents who make their AC’s (adult children) feel guilty about moving on with their lives.  I was surprised at some of the comments I heard when I mentioned that Troy moved to LA.  “How could you let him go?  I told my kids they were never leaving me. They all know better. I’d have a hard time with that.”  Wow, how selfish.  How very selfish, manipulative and self-centered.  First of all, Troy is a grown man.  He didn’t need my permission to live his life and follow his dreams.

Which brings me to the title of this post.  I had a patient who was talking about his grown son who moved out to La La Land.  I mentioned Troy.  He lamented, “Yeah, everybody has a son in California. Mine is no good.  I never hear from him.”  He then continued, ”I have one in New Jersey, too. He doesn’t call either.”  Hmmmm.  I wonder if my patient drove them out of his life.  Who knows?  But, it made me think about getting older and the circle of life. And, being appreciative.

“Ditch self-pity and anger.  Use this time to grow, learn new things, volunteer.  And, travel.”

I got a kick out of going to visit Troy last year.   Cali was more beautiful than I imagined. The cover shot was taken at Venice Beach, not far from his apartment. I was blown away with the awesomeness of the Pacific Ocean, the majestic palm trees, the trendy shops along Abbot Kinney Boulevard in Venice and the Santa Monica pier with the iconic Ferris Wheel.  He even took me by his office and I waved to some of his co-workers who were outside.  It was pretty cool driving on the Pacific Coast Highway and even stopping along the way at beautiful Pepperdine University.  But the best part of the trip?  Just spending time with my son talking and relaxing in his neck of the beach.  He introduced me to another TV show; Black Mirror.  It did my heart good to see him happy, healthy and thriving.  To no surprise, Troy loves Cali.  It’s a beautiful fit.  What more could a mom want?

Dollars And Sense: 3 Smart Money Hacks To Stick With Beyond The Coronavirus Pandemic
Perfectly Imperfect: Stop Beating Yourself Up

9 thoughts on “Everybody Has A Son In California: Adjusting To Life When Adult Kids Move To The Other Side Of The Country”