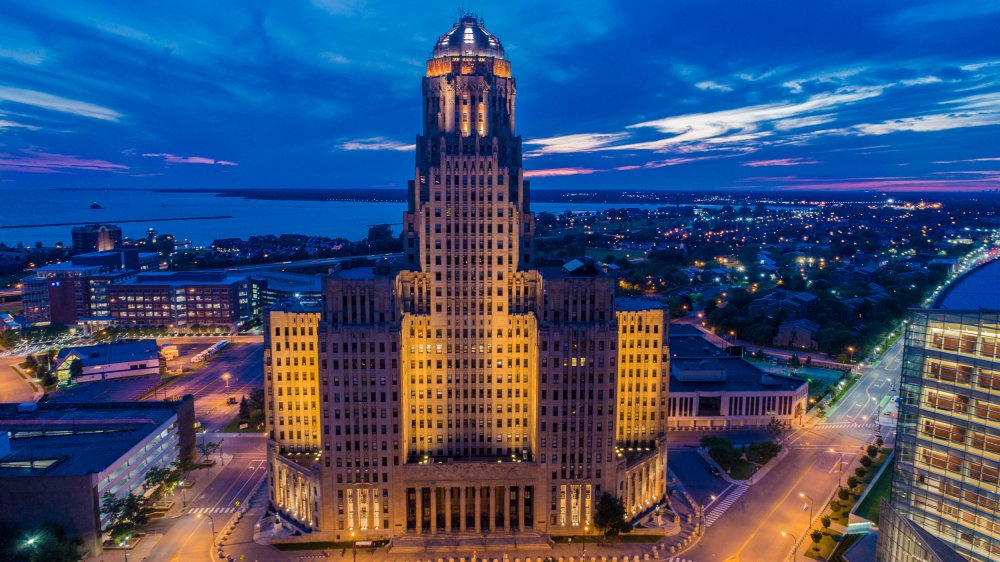 My nostalgia meter is off the rails.

Comforting, like a big bowl of warm peach cobbler.

And, not just about my boundless love affair with my hometown of Buffalo, New York–affectionately called the Queen City, Nickel City, the City of Good Neighbors and the B-Lo.

A little bit of the back story, first.  So, this all makes sense.

I hold onto stuff that reminds me of happy times, ordinary moments  and milestones.  I still have all the report cards, art work, macaroni necklaces and homemade holiday cards from my sons when they were kids.  I got rid of their baby clothes only nine years ago.

Not a total sweep, I kept several  juice stained sweaters.  And, their white, scuffed baby shoes.  LOL!  My photo stash in albums, drawers and boxes is insane.

Before you go there, I am NOT a hoarder!  And, I am NOT stuck!  But, I am a connoisseur of sentimentality. LOL!!

I am THAT woman!

My heart is still tethered to this city that I moved out of 32 years ago; a young married mom of a rambunctious 18-month-old son, Kevin, with a penchant for nibbling on house plants and unwinding toilet paper throughout the house.

A better job opportunity in NYC came knocking for my ex-husband.  Leaving my parents, sister, dear friends and a job I truly loved at a local TV news station as a reporter trainee, was gut wrenching.

I didn’t go kicking and screaming; but, it was pretty close.  LOL!

Putting down stakes  in Mt. Kisco, a picturesque Westchester County suburb of Manhattan, was unsettling.  I didn’t know anyone there. But, that wasn’t an issue.  I’ve never had a problem meeting people or being social.

The first folks I met (neighbors) were pretentious and uptight.  One couple insisted on giving me a “tour,” of their townhouse so I could see their new living room furniture purchased at a swanky store in Scarsdale.  The sofa sucked.

These people weren’t my cup of tea; unlike down-to-earth Buffalonians.

Saying goodbye to Buffalo was like being dumped by your first boyfriend; you can’t breathe and you feel like your life is over.

Loved ones tell you it will be okay, but, you can’t imagine being with anyone else.  Yes. Life goes on.  But, you never forget!!

These are the things I LOVE about being a native Buffalonian.   Let me start with the elephant in the room.  LOL!

Of course,  snarky jokes about the long winters, dicey driving and brutal snow are legendary!

Piled on by talk show hosts, comedians, beach bums and practically every human on the planet.

But.  It didn’t phase me one bit.  It wasn’t a miserable existence.  To the contrary, the powdery flakes were mesmerizing, magical, romantic, refreshing and serene. A beautiful winter wonderland.  Spectacular icicles on trees glistened in the sun like glass shards.   It wasn’t run-of-the-mill; it was special and unique.

Of course,  the infamous Blizzard of ’77,  that crippled the city for weeks, branded Buffalo as a place you really didn’t want to live or die in.  Okay. It wasn’t a destination spot.  LOL!  And, we didn’t take kindly to outsiders spitting on our home plate.

We survived and it taught us about resilience and pride;  families and communities pulling  together during a crisis.

Maybe some of you find this syrupy adoration hard to swallow, especially if you hated your hometown, split and have to be blind-folded and hog-tied to go back.

Clearly, Lionel Richie wasn’t singing about Buffalo’s beautiful brick houses with the Commodores hit record, decades ago.   But, these homes turn heads, too.

Buffalo is a city of diversity and the neighborhoods reflect that, architecturally.  I swoon over big, brick homes with porches, stoops and chimneys. They have character and history.

I grew up in one of them;  262 East Delavan Avenue, on the East Side.  It was multi-family.  My family lived upstairs, my Godparents lived downstairs.  My mom and godmother’s beauty shop was in the basement.

All the houses on this shady street with wide sidewalks were arms length close.  It was the best!

When the windows were opened, you could smell the aroma of a neighbor’s freshly baked pound cake, ribs on the grill or hear conversations.  Good and bad.  LOL!

I loved being part of a village where folks looked out for each other.

My 31 year old nephew, Chris, is a self-proclaimed foodie; a fourth generation Buffalonian. He calls the food scene, ”simply authentic.”  That’s how I remember it, too.

This may surprise you. The B-Lo has the largest two day food festival in the nation called, the “Taste of Buffalo,” and a slew of other tasty ethnic festivals; Lebanese, Irish, German, Italian, Greek, to name a few. Be prepared to pig out!  Wear your spandex!

The iconic Anchor Bar Restaurant gets a gold star for putting “Buffalo wings,” on the map in the 1960’s.  It’s mainly a tourist place, now.  Most locals get their wing fix at Duffs.  And, Buffalonians don’t call them Buffalo wings, just wings. LOL!

One of the local foods, I miss most, is the “beef on weck” sandwich; thinly sliced juicy roast beef, topped with horseradish, served on a salt and caraway encrusted  “kimmelweck,”roll, with a dill pickle on the side.

The cover girl, under the violet night skies, for this blog post, is City Hall.  Take in the grandeur and beauty of this 32 story, 378 foot tall Art Deco masterpiece.  She’s mammoth and badass!

I took her for granted during all those boring school field trips.  I assumed all City Halls looked like this.

I was slapped with reality, when I moved to Bridgeport, Connecticut and saw our white bread, pint-sized counterpart.  LOL!

Buffalo City Hall has been the backdrop for several Hollywood films; most recently, “Marshall,” the story of Supreme Court Justice Thurgood Marshall, starring Chadwick Boseman; ironically it was used as the Bridgeport courthouse.

I’m not gonna lie.  When I lived in Buffalo I only went to two games.  They were memorable: I got hit in the head with a beer bottle from a drunk NY Jets fan and the other was during a snowpocalypse; my fingers were frostbitten.   I don’t know who was on the field; visibility was zero.  But, the Bills kept playing their hearts out.

That’s a huge reason why I admire them.  Tenacity!!  They keep showing up; despite being underdogs, laughing stocks and going to the Super Bowl four times.  We all know those heartbreaking outcomes.

Super Fans aka the “Mafia,” are loyalists; they fill the stadium; do crazy stunts, have outrageous tailgate parties and the Bills backs.

The anticipation is crazy when I go home to visit my beloved sister, Karla, and lifelong friends, many from grade school and high school.  We are big kissers and huggers; always genuinely happy to see each other.  And, supportive of all the twists and turns in life.

It’s a feeling of belonging even though I haven’t belonged in decades.  It really doesn’t matter.  It’s where my story began.  It’s where I feel alive.   It prepared me for the world.

Buffalo is a city that doesn’t have to put on airs or try hard to impress.  It has grit.  It may not have the gravitas or sexiness of New York City, our cousin on the Hudson, but has its own signature style and imprint as New York state’s second largest city.

While growing up in the 60’s and 70’s; Buffalo was a blue collar, industrial town with a seedy downtown and infamous red light district on Chippewa Street.  Today, downtown has undergone a huge economic revitalization yielding an impressive Canalside waterfront, vibrant restaurants, boutique hotels and sparkly new buildings.

So much is new and unfamiliar, I often feel like a visitor.  Thank goodness for my GPS. I was home last month to kick off my blog with family and friends.

I was extremely grateful for all their love and support, as usual.  My dear friend of nearly fifty years, Sandy, was my right hand cheerleader, making it a success.

I met my husband and have made beautiful friends that have enhanced my life while living in Bridgeport since 1987.

However, when folks ask me where I’m from, I still say Buffalo.  LOL!

If you need a nice getaway, visit my hometown.  I might see you when you get there.

Share:
Pluviophile: Just Call Me A Rain Dancer
20 Things I Would Tell My 20-Year-Old Self